You may be a Literary Genius and just not know it…

I love odd little literary news items. There was a big one that occurred over the last weekend. Charlotte Bronte’s little tiny 4000 word ‘magazine’ sold for almost a million dollars in England.
I guess she wrote six of them. Four are in the care of a Bronte museum in England, and one is still missing. The museum bid for the hard-to-read hand-written book, but was outbid by a French museum by 20,000 pounds.
Charlotte was only 14 in 1830 when she wrote the books to entertain her younger siblings. I have to wonder if she had any clue that her childish scribbles would later be fought over by two countries and be so valuable. I read comments on one of the articles about the sale, and the British seem to be very upset. What appears to grate on them the most is the fact that it was bought by the French, and it will be taken out of Bronte’s native country.
Charlotte later went on to use one of the ‘magazine’ scenes in her novel Jane Eyre, one of the greatest novels ever written.
Switching gears- 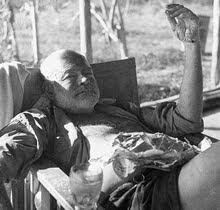 A couple of days ago, I was watching a news segment on Earnest Hemingway’s home in Cuba. If you read his biography, you will find that Hemingway was a tortured individual. He suffered illnesses, wars, plane crashes, electroshock therapy for depression, and eventually shot himself in 1961. He had the advantage over Charlotte Bronte of being recognized for his work, both good and bad. He won a Pulitzer, and eventually a Nobel Prize in Literature, but it took him as many bad reviews to get there as good.
Again, another legend, though from a completely different perspective.
The news anchor wandered through Earnest Hemingway’s home with his grand-daughter Mariel, and they paged through an old manuscript. It was hand-written, heavily scribbled on, and, they remarked, definitely not ready for release to the public. There was too much profanity.
I guess what interests me the most is the dichotomy between the author’s journeys, and how they ended up being two of the most well-known authors in history. It’s heartening to know that they started out EXACTLY the same way I have- wanting to write.
I believe we have legends in our midst right now, recognized and not, that have changed the writing genre as we know it. Maybe someday WE’LL be the legends. We just have to perservere and write the very best work we can.
What author do YOU admire most for their work in the genre?
Thanks for stopping.

Stay up to date on Jen's News!

If you sign up for Jen's newsletter she'll keep you up to date on the most important news about Lost and Found, the Dogs of War and all of her other amazing projects!

You have Successfully Subscribed!